The sky was midnight black as we stepped carefully over barbed wire that we could barely see in the dark, and squeezed through a fence a few paces beyond. Randy and I entered our bird observation blind through the zippered door of the nylon tent-like structure. There were zippers everywhere, for poking our cameras out in any direction. The temperature was about 35 degrees as we sat down on two plastic chairs to get our camera equipment organized by flashlight in the darkness.
Even before we could see the birds, we could hear the soft plopping of the grouse inflating the air sacs on their chest. As the first hint of dawn crept into the sky, and then began to illuminate the area around us, we realized there were many grouse strutting, displaying, running and fighting.

At first we could only make out the movement of the birds from the patches of white feathers on the males’ chest that we could see in the dim light. Gradually as the light increased, we began to see more and more birds, and I believe more birds also continued to gather on the breeding ground, until there were around a hundred birds, mostly males in various stages of display.
We were watching the mating dance, or display, of the Greater Sage Grouse, on ranch land about nine miles out of Dubois, Idaho, as part of the annual Dubois Grouse Days festival. For years, ever since seeing a photograph of this flamboyant display, I had wanted to see this bird in its mating dance. It was exhilerating to see so many of them, and fascinating to watch.
This three-and-a-half minute video captures the birds strutting, displaying, fighting, and copulating.
Once widespread across most of western North America, the population of this large grouse may be only half of its historic levels due to destruction of its native shrub-steppe habitat through agriculture, urban development, and over grazing. It is a large bird, up to 30 inches long and standing two feet tall, weighing from two to eight pounds.

The Greater Sage Grouse is mainly found at elevations of 4,000 to 9,000 feet in the broad sagebrush plains of the central Rocky Mountain states, Nevada, and northeastern California, with a small population in central Washington. Adults depend primarily on different species of sagebrush for their food as well as for cover. The bird has been considered for protection under the Endangered Species Act, and various government and private agencies are working to conserve remaining habitat in order to reduce the continued decline of this species. 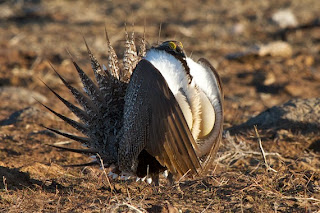 In the spring, the Greater Sage Grouse males gather on historic breeding grounds known as “leks” to strut and try to attract females. They fan their beautiful pointed tails; strut in one direction and then another as if to show off both their fancy tails and the dramatic white ruff of feathers around their neck and chest; they inflate yellow air sacs underneath the white feathers that cover their chest, and seem to almost pump the air sacs several times in a row with a plopping sound each time. If you get a good look, you can also see that they erect special head plumes at the height of this display. The females are mostly attracted to the main or dominant male(s) on a particular lek, and a female will signal by a distinctive holding open of her wings when she is ready for mating.

We watched the birds for about two-and-a-half hours, fascinated by their behavior, on this lek outside Dubois, which actually was in a corral. We felt gratitude to the rancher for allowing the birds their natural mating ritual, and giving permission for the use of his land by visitors for the Dubois Grouse Days.

The next day, we had arranged to use a blind at the Crooked Creek Preserve of The Nature Conservancy, about 25 miles west of Dubois. This is a lovely unspoiled 82,000-acre preserve, mostly sagebrush steppe, with gently rolling hills rising to snow-capped peaks in mid-April. Another two-and-a-half hours in a similar blind, starting well before dawn, was a wonderful experience.


For anyone interested in watching or photographing the Greater Sage Grouse display, we would highly recommend the two-day Dubois Grouse Days either for their guided tours to the leks, or to arrange for the use of a blind.