Another very photogenic spot for our last full day in Galapagos, on the island where Darwin spent half of the time he spent on land in these islands.


For a detailed account of Darwin's experiences here, read the book by Thalia Grant and Greg Estes, Darwin in Galapagos: Footsteps to a New World (Princeton University Press 2009). Grant and Estes have been called the world experts on Darwin in Galapagos. We couldn't believe our good fortune in having Greg as our guide on this trip!


After a wet landing on sand we walked on volcanic ash and pahoehoe lava, observing the wildlife in the intertidal area, part of which Greg called a "Fur Seal grotto." 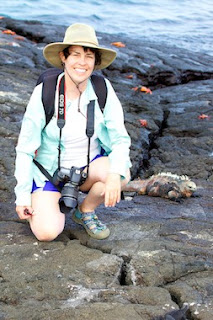 Again we saw many Marine Iguanas and Sally Lightfoot Crabs on the lava rocks.


An American Oystercatcher pair walked along the beach with their chick.

This Sea Lion posed in a beautiful setting surrounded by Sally Lightfoot Crabs.


Our best views of Pacific Green Sea Turtles, which we saw several times on our snorkels, was today.


After our visit to Santiago Island we navigated Buccaneer Cove on our way to Bartolome Island, a small islet just of the east coast of Santiago.

Bartolome Island
The views from Bartolome are probably the best known scenes of Galapagos - and most visited by tourists - because of the proximity of this island to resorts, as well as the spectacular views from the top of the island 360 feet above sea level, accessed by a boardwalk and 380 wooden stairs.


Black Turtle Cove on Santa Cruz - Day 8
This trip was packed with activities, even on the morning before we prepared to go to the Baltra Airport for our return flight to Quito. Back off the coast of Santa Cruz, near Baltra, on the morning of Day 8 of our Galapagos cruise, we enjoyed a morning panga ride at dawn in Black Turtle Cove. With our image of Galapagos as so dry and arid - which the islands are - it was always surprising to see the lush green mangroves along some of the coasts. Here we saw Pacific Green Turtles, Great Blue Heron, and several sharks including a group of five lurking together as if they were sleeping below the surface of the water. 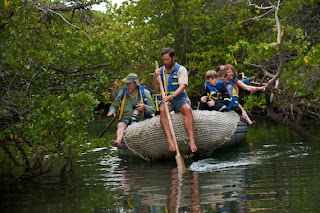 One more experience on Isabela, the largest island, with a wet landing at Urvina Bay. We were met by an immature Galapagos Hawk, who seemed unfazed by our approaching within a few feet of him as he sat on the sign indicating the direction of the trail. In decades of birdwatching I had never seen birds that would allow us so easily to get so close as we had to Magnificent Frigatebirds, Blue Footed and Nazca Boobies, and this hawk.

Walking on a trail of volcanic ash, pumice, and lava, we saw a Giant Tortoise moving slowly through the brush. Before long we saw another Galapagos Land Iguana next the hole it had excavated, and later another who stayed right on the trail as we carefully stepped around him.


Greg told us these animals have a preference for yellow, as they feed on the yellow flowers of more than one species of plant. He says he has even seen Land Iguanas follow a person down the trail who was wearing yellow socks or had yellow shoelaces!

Walking through an area that had experienced a dramatic uplift from being under the sea in the late 1990s, Greg had vivid stories of the impact of this sudden uplift on the wildlife. Next to the trail we walked by large pieces of coral that not many years before had been living and underwater.


As we examined some of this coral, Greg identified a Medium Ground Finch on a nearby bush. We admit we never did completely grasp the identification of the many different finches in Galapagos. Upon a little closer study, however, the beaks are the main key to identification, and each species really is quite distinctive. Our pocket guide identified thirteen different species.

In his Pulitzer Prize-winning The Beak of the Finch (1994), Jonathan Weiner wrote a compelling account of the life work of Peter and Rosemary Grant, who documented their observations of evolution actually taking place among the finches of Daphne Major, one of the Galapagos Islands. A week after we completed our trip we learned they had just arrived again on Daphne Major to pursue their continuing research on the finches there.

As we came back out towards the bay to meet the panga, there was a beautiful lagoon surrounded by lava rocks, where we saw Brown Pelicans and Great Blue Herons.


After this walk at Urvina Bay, we snorkeled along the lovely rocky coast. As Blue Footed Boobies and Flightless Cormorants watched from perches on the rocks, we swam with several Sea Turtles and saw more and more colorful fish, as we swam along a steep drop-off not far from shore and tried to avoid being washed up on the rocks by the gentle surf.

The afternoon of this day, after traveling to Fernandina, we made a dry landing from the panga onto black pahoehoe lava at Punta Espinoza, one of the most photogenic places we visited. On the panga ride to our landing, Brown Pelicans filled the sky and water in a feeding frenzy - flying above, diving into the water for fish, swimming as they scooped up more fish, taking off to watch for fish from above and dive again. When we landed, several of these birds with their great feeding pouches posed for photographs. 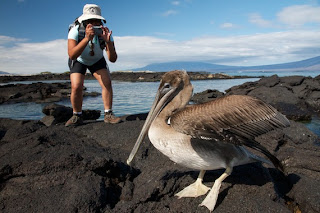 As Greg promised, we saw "hordes of Sea Iguanas" nearly everywhere we walked over pahoehoe lava and sand. The iguanas are coming into the mating season in December, so there was some male display - mostly we observed them opening the mouth, bobbing the head, swelling up the body a bit, apparently in order to look more fearsome. While we saw them swimming, we saw many more of them on land. They lay on each other for warmth, as well as seeming to try to position for superiority. They also have the ability to spit quite a distance. We thought the Marine Iguanas in Galapagos were the most prehistoric-looking of the animals we saw. They are all the same species, but vary in color - see the previous images of the iguanas with deep red and green patches on Espanola. 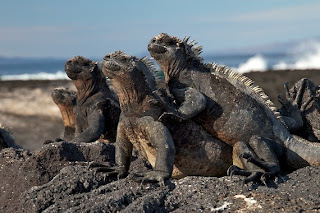 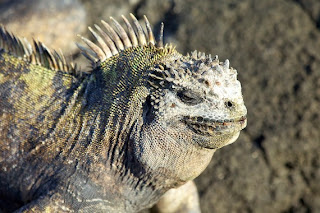 Occasionally a lava lizard will run up on the back of an iguana and perch there.


The beach where the iguanas lay their eggs was off-limits for walking so as not to step on their eggs, but it took care, even walking on the established marked trail, not to step on these prehistoric-looking animals. The trail marker is the black and white stick behind the hiker on the trail; the protected nesting area is the sandy/gravel beach to the left of the marker.

Sea lions lounged on the rocks and beach, paying little attention to tourists. 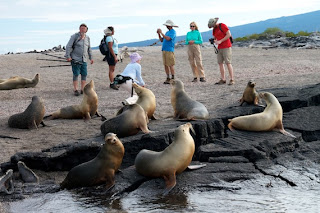 We observed the Flightless Cormorant up close.

The American Oystercatcher is a striking bird.
The bright orange Sally Lightfoot Crabs, which are six inches across and abundant on all the rocky coasts, always caught our eye.

Our fifth day in Galapagos and again many new experiences. We started with a dry landing from the panga at Punta Moreno and a lava walk over pahoehoe lava. Fascinating terrain, so forbidding and lifeless at first glance, and yet various plants, including cactus and even a fern, had managed to take root on this rough lava.

There was also insect life on the lava. A Galapagos Painted Locust, quite impressive at about four inches long, was the most colorful insect I have ever seen other than butterflies.


In the distance we could see two major volcanoes as we walked across the lava. 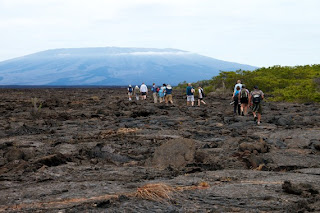 Freshwater lagoons had formed in several places and were surrounded by green vegetation - a surprise when walking across such a hostile-looking and forbidding part of the landscape.


We spotted Black Necked Stilts, Common Gallinules, and even Greater Flamingoes in one lagoon. Every time Greg had told us we "might" see something like the vermilion flycatcher in the highlands of Santa Cruz, or flamingos here on Isabela in a lagoon surrounded by lava, but he cautioned us there was no guarantee, we had seen it, so he was getting a good reputation for these predictions.


Returning to the bay to get back in the panga, mangroves and other vegetation was thick along the shore of the bay.


After our hike we snorkeled again from the panga, this time in water that was 61 degrees F.

Following the snorkel, we traveled to Elizabeth Bay, also surrounded by mangroves, where we enjoyed a delightful late afternoon panga ride around the bay and observed more wildlife. Here we had great views of several Flightless Cormorants. Their wings are pathetic compared to flying birds, but it doesn't seem to matter as this bird is adapted to swimming rather than flying and feeds underwater. We also saw the Galapagos Penguin, the most northern species of penguin in the world, and the only one that can be observed around and in mangrove trees!

We laughed at the "tree" lion, having been told that Sea Lions like to climb up onto the branches of the mangroves to rest. This behavior makes sense, as this is a convenient resting place out of the water. Nevertheless seeing a Sea Lion in a mangrove was an incongruous idea when we started.


Brown Pelicans, Blue Footed Boobies, and Marine Iguanas were either in the trees or on the rocks around the bay. We saw several Pacific Green Sea Turtles from the panga. After one false alarm, Greg spotted and pointed out a a pair of Sea Turtles copulating, which they do at the surface of the water. Very interesting sight.