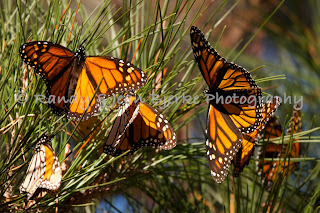 The monarch is the only insect that makes a two-way migration in the same way that many birds do. The butterflies look delicate and fragile, but they travel an astonishing 2,500 to 3,000 miles from their summer range in Canada to southern California or Mexico for the winter. They use three major flyways - along the western coast of North America, down the center of the continent to Texas, and down the east coast. 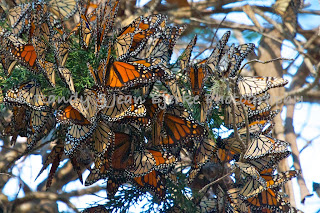 Monarchs west of the Rocky Mountains overwinter in southern California and Baja California. Monarchs in the eastern part of the continent fly all the way to the Sierra Madre Mountains of Mexico to overwinter, roosting in oyamel fir forests and clustering together for warmth. Mexico established a Monarch Butterfly Biosphere Reserve in the Sierra Madre in 1986, expanding it in 2000 to include a total of 217 square miles. 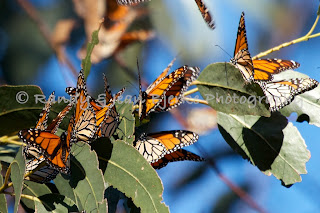 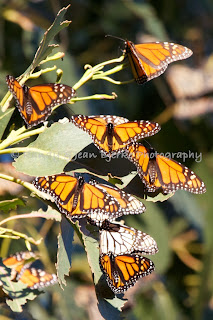 Monarchs live only two to five weeks during the mating season, laying eggs on milkweed plants which in turn provide a food source for the larvae. Several generations of butterflies live and die over the summer, but the last generation of the season does not reproduce and therefore lives longer. These are the butterflies that migrate, and this generation can live eight to nine months.
Along the California coast and down into Baja California, there are over 300 overwintering sites, among which the best known and most spectacular are in Pacific Grove and Pismo Beach. The largest population of overwintering insects is at Monarch Grove, at Pismo Beach State Park, where these monarchs were photographed. 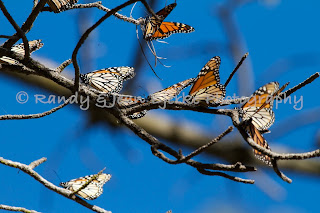 From November through February, the insects can usually be easily observed in these locations where they roost in eucalyptus, Monterey pine, and Monterey cypress trees, returning to the same trees year after year. The sight of these beautiful insects clustering in the branches, sometimes by the thousands, is awesome, their delicate beauty magical. There can be as many as ten thousand butterflies on a single tree.
The best conditions to observe the butterflies are on the warmer days, when the monarchs are more active. We were fortunate to visit Monarch Grove at Pismo State Beach the day after Thanksgiving, on a sunny day when the afternoon temperature was about 70 degrees. Most of the butterflies were roosting, some of them in huge clusters, but many were also flitting and fluttering about. 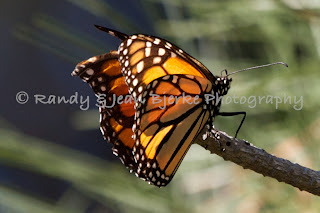 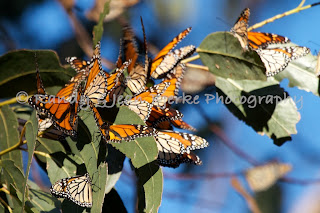 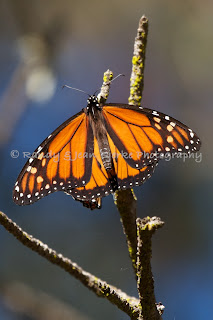 In February and March, the butterflies that overwintered begin to breed as they travel north, laying eggs on milkweeds along their way. However, the butterflies do not live long after breeding. The generation that migrated south the previous fall dies soon after reproducing, shortly after the spring migration begins. Their offspring continue the migration, with each generation traveling farther north, and it takes three to four generations to reach their summer range. 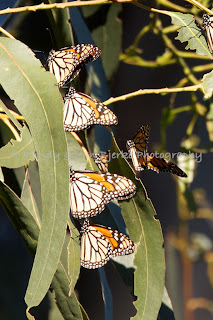 The monarchs’ migration patterns are a subject of both fascination and scientific research. It is one of the particularly astonishing mysteries of nature, that the individual butterflies that summer in Canada or winter in California are several generations removed from each other, and no individual butterfly migrates both ways.
Posted by Jean at 8:23 PM