Petroglyphs, Rock Art, and Caves of Zion and Southern Utah

The “color country” of southern Utah offers stunning scenery, spectacular hiking, challenging climbing, awesome photographic opportunities, and fascinating archaeology and history. A lifetime would not be enough to explore all that this area offers.

Recently my husband and I have visited some locations in southern Utah where we were able to explore a few caves and observe some prehistoric petroglyphs and pictographs. These sites inspire wonder and awe, as we try to imagine why the art was created and what it means.

My purpose is to share the wonder of some examples of this prehistoric Native American rock art, that may go back a thousand years or more, and to encourage respect and reverence for these priceless artifacts.

The dramatic, sometimes layered, swirling, twisted, and jumbled rock formations of southern Utah contain some amazing and surprising spaces. A fascinating geologic phenomenon of southern Utah is its wonderful slot canyons. In fact Utah has been said to have the largest concentration of slot canyons of anywhere on earth. I wrote about the Kanarra Creek slot canyon in a previous blog post.


Water and wind erosion over long periods of time create both the slot canyons and other fascinating formations like caves. 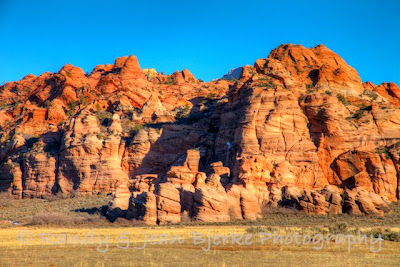 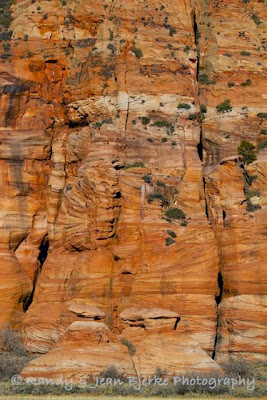 In the relatively soft sandstone cliffs there can be hidden entrances to caves formed by erosion of the rock formations. Some of the cliffs and caves contain petroglyphs and pictographs.

Some petroglyph and pictograph sites have attracted vandalism, and so there is increasing interest in protecting them from too much attention. While even the light touch of a finger can leave oils that over time will damage the ancient markings, vandalism has included defacing of the art, damage by off-road vehicles, and even removal of rocks themselves. A well known case of vandalism of petroglyphs in California, in which part of a rock face was actually removed and carted away, was covered by the Los Angeles Times and New York Times in 2013 when the rock panels were recovered. Now, in many cases national park websites and rangers will not officially reveal the locations of ancient Native American rock art.

I am respecting that caution in this post, so I am not naming the locations of the caves or the rock art shown here.

Southern Utah has been inhabited for 7,000 years, most of that time pre-dating written history and therefore considered “prehistoric.” Most of the rock art is thought to have been created by the Anasazi, Fremont, and Paiute peoples, over hundreds of years, and some examples may go back a thousand years. It is not unusual for a single site to display art from different periods and peoples.

Research is ongoing to determine the age of various examples of rock art. There seems to be no general agreement by scholars on the meaning of the art, which may depict people, animals, and geometric shapes. Was it ceremonial? Religious? A form of documentation of important events? Related to hunting? There is speculation that some sites may have significance with regard to the lunar calendar, perhaps marking the summer solstice.

Petroglyphs and pictographs are irreplaceable cultural treasures. If you are interested in observing examples of ancient rock art yourself, some internet research, together with local inquiries, including inquiring with park staff, are a good place to start. Please treat any rock art you find with great care and respect - no touching, no food or fires nearby, or any activity that could disturb the art. Follow the well-known saying: “Take only pictures, leave only footprints.”
Posted by Jean at 9:01 AM