Traveling the Dempster Highway is an awesome experience. The all-gravel road is wild, remote, and rugged. It extends 456 miles from the Alaska Highway in the Yukon to Inuvik on the Beaufort Sea, in the Northwest Territories. 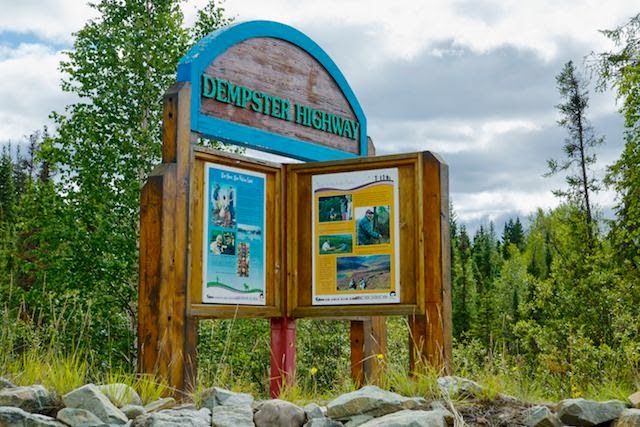 The Dempster follows great rivers, sweeping valleys, and along several mountain ranges, through hundreds of miles of boreal spruce forest and across seemingly endless expanses of arctic tundra.

The landscape is vast, awesome, lonely, and breathtaking. Driving conditions are challenging, unpredictable and sometimes dangerous. The road extends 250 miles north of the Arctic Circle, and is built mostly on permafrost. The drive is more beautiful than I had ever imagined.

". . . the scenery is sublime . . . vastness such as I have
never before conceived, while in every direction,
as far as the eye could reach, appeared to brood
the spirit of profound solitude, silence and desolation."
- Canadian explorer William Ogilvie, 1893
This blog post shares some of our photos from five days on the Dempster. We drove about two-thirds of the road, up to the border between the Yukon and Northwest Territories. The road is open all year.

The Dempster becomes an ice road in winter, and instead of crossing two of the rivers by ferry, one drives across the frozen rivers. There is a very short summer season this far north, and the foliage starts to turn its fall colors in August.

We enjoyed fairly good weather on our visit. There was drizzle, fog and light rain, with sun periodically breaking through the clouds to bathe the landscape in beautiful light and reveal breathtaking vistas.

Thankfully we saw some sunshine, and we did not experience heavy rain - in which case all recommendations are to stop and wait it out for a few days until the road dries, due to the extremely slippery, difficult, and hazardous conditions when the road surface becomes muddy. Day time temperatures were mostly in the 50s in early August; night time temperatures in the 40s, with one night down to freezing.

The drive on the Dempster starts with a wood plank bridge over the Klondike River, and proceeds through a forest of spruce and poplar, following the valley of the North Klondike River.

A highlight of the Dempster is spectacular Tombstone Territorial Park, about 45 miles up the road. The Tombstone Range is magnificent, and the park offers the easiest hiking along the Dempster, as farther north it is very difficult to walk on the mostly soggy tundra.

Farther north, the streams become larger and more mountain ranges come into view.  We thought this road was fairly rugged in a four-wheel-drive truck, and we were in awe of the hardy few who did the road on bicycles.

The Eagle Plains is an amazing area - not a flat plain, but a large plateau of rolling hills, covered with boreal spruce forest and tundra, that extends for hundreds of miles. This area is distinctive in that it was un-glaciated in the last Ice Age, and is one of the few un-glaciated parts of Canada.

There are services at only two places along the Dempster, the first of which is at Eagle Plains Lodge at the mid point of the highway - which offers lodging, showers and laundry; a restaurant; RV camping with electrical hookups; gas, diesel, airplane fuel, and a service station. If you are driving from Whitehorse, as we did, it is 317 miles from the last fuel at Pelly Crossing to Eagle Plains Lodge.

The Arctic Circle, north of which the sun is never high enough in the sky to shine straight down on the land, is 21 miles north of Eagle Plains. Beyond the Arctic Circle, there are fewer trees, and mostly tundra. The indescribably beautiful landscape is like nothing I had ever seen.

You may see bears, wolves, caribou, and other animals along the Dempster. We were told a grizzly had walked into the lobby of the Eagle Plains Lodge one warm July day when they had left the doors open for the wonderful fresh air.
If you are considering driving the Dempster, do your research and prepare for anything. Bring extra tires. Carry extra water. This is a rugged, remote, challenging drive and you are far from help or services.

We seek to capture images that record nature’s beauty rather than gloom. It was drizzly, raining or grey overcast throughout most of our trip. We were fortunate to experience the only sunny morning in a two-week period when we first glimpsed the Tombstone Range. Our images were mostly made when the sun broke through the clouds. Don’t count on perfect weather if you try this drive! And be prepared for mud, probably more mud than you have ever seen on your vehicle. If you don’t get mud, you will be enveloped in clouds of dust. The mud is a particularly slick, slippery, smelly, nasty mud that will totally coat your vehicle, very likely in several inches of mud if you drive after much rain. The road is treated with calcium chloride to keep down the dust, and when this mixes with water after a rain the results are ugly, the road surface dangerously slippery, and the mud is very corrosive to your vehicle.

Some good resources are:
Posted by Jean at 4:50 PM