Yellowstone is a sacred place to me, a place of immense natural beauty, awesome scenery, abundant and amazing wildlife, unique and wondrous geothermal features.


Each season offers special opportunities to observe wildlife, and by early to mid June, visitors can spot black and grizzly bears with their cubs, wolves with their pups, bison and elk with their calves, and pronghorn with their fawns. In the Madison River Valley, we enjoyed watching a herd of bison cows with their calves, as they walked along the river, several of the animals swimming back and forth across the water.
A pair of sandhill cranes were followed through the grass by their chick, who mimicked their every move.


In the beautiful and wild Lamar Valley, in the undeveloped northeastern corner of the park, we saw hundreds of elk and bison, as well as a majestic bighorn ram, and two female pronghorns with their fawns.

Staying overnight in nearby Silver Gate, we were up well before dawn to join other wolf watchers with our rented high-power spotting scope, and were rewarded with the opportunity to watch the five adult wolves and four pups of the Silver Pack just as the sun rose.
The animals were much too far away for photographing the wolves, but from high on a sage-covered hillside on the north side of the valley, we watched the pups romp and play, and the adults lounge about, in the early morning sunlight.
Later in the day we watched two of the three adults and two of the three pups of the newly-named Lamar Canyon Pack, near the location known to experienced wolf-watchers as the den of the former Slough Creek Pack, which the new group used this season to have their pups.

A highlight of our first visit to Yellowstone this season was watching a bald eagle nest, with one young bird who was testing his wings and flight skills just days before he fledged.
The adult eagles in flight were magnificent - more than worthy of being identified as our national symbol.


On another visit to the park, we stopped along the Firehole River where it meandered through the Midway Geyser Basin.


A great blue heron in full breeding plumage preened on the opposite bank, in a colorful wildflower meadow of purple larskpur and other flowers. The fancy plumes are only present in breeding adults, and although I have watched great blue herons all over North America for more than thirty years, this was the best opportunity I have had to watch and photograph such a beauty. 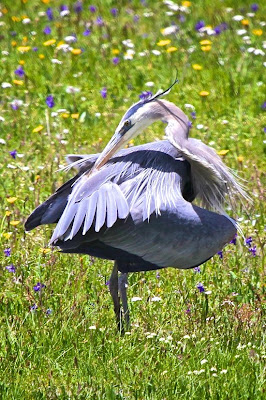 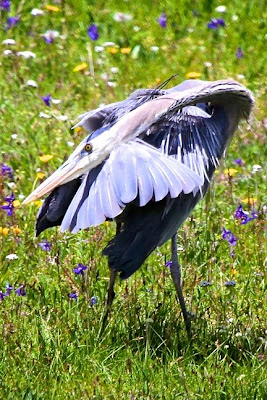 Old Faithful is the most famous geyser in the world, attracting tens of thousands of visitors annually to observe its regular eruptions which occur about every hour to 90 minutes and last from one-and-a-half  to five minutes.

Grand Prismatic Spring is not far from Old Faithful, and is one of the largest and most colorful of the hot springs in the park. The color of the hot springs comes from microbes living in the hot water - and varies from blue through orange depending on the temperature.
Posted by Jean at 8:15 PM