Just before New Year's 2010, in beautifully clear weather, at the first rays of morning sun, these chickadees captivated me at a feeder at our cabin near Raynolds Pass in Island Park, Idaho, at about 6600 feet elevation. Here is the black-capped chickadee, found year-round throughout most of the northern U.S. and most of Canada. Note its solid black cap and bib. 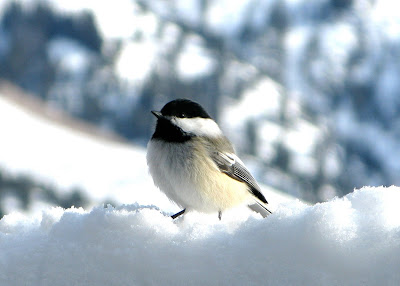 Chickadees have always reminded me of Christmas ornaments when they flit among the snow-covered Douglas Fir boughs outside our window in winter. It is amazing that these tiny birds that look so delicate are actually so hardy. They can survive harsh winters at high elevations, and extended periods of sub-zero temperatures.
Below is the mountain chickadee, also found year-round throughout most of the western U.S. and Canada. Note the black eye stripe. This is the only one of five species of chickadees found in North America, that has the black eye stripe. 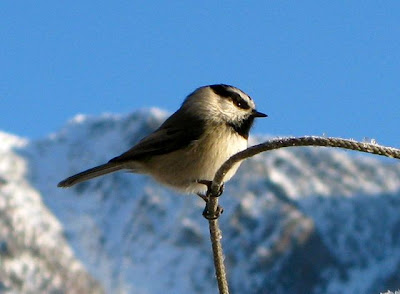 There is evidence that these two species have interbred or hybridized in Island Park, Idaho, a phenomenon covered by the Island Park News in its January 7, 2010 issue. (To read the whole article, you must subscribe to the on-line edition of the paper.) Elsewhere in the U.S., there is documented evidence, some of it based on DNA testing, of hybridization between other species of chickadees.
Posted by Jean at 9:02 PM