Four of the five entrances to Yellowstone National Park are closed to wheeled vehicles from November until April or May. The first to re-open in spring is the West Entrance in West Yellowstone. Our photographer friend Pam Talasco had been counting the days for months and had persuaded us that we absolutely had to be there for Opening Day. Numerous serious photographers and ordinary tourists shared the park this weekend.
The night before the park opened, we were excited with anticipation. Bears had been sighted with cubs around the park in recent weeks, and a wolf had been sighted in the geyser basin not long before. There were already many signs of spring, not the least of which was the weather forecast of temperatures in the 60s for the first two days the park would be open.
A line of cars formed at the entrance awaiting the exact hour of 8:00 when the entrance would open. There was surprisingly little snow along the entrance road due to the warm weather of recent weeks. Not much animal activity in the first couple of hours. Two Canada geese in the bald eagle nest looked incongruous. Imposters! 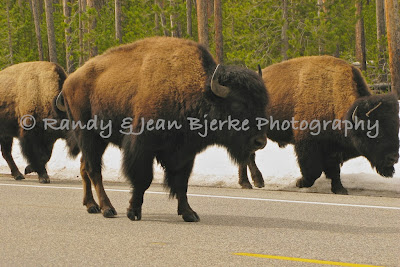 A few bison and some elk were spotted from a distance, and some bison owned the road, but mostly we just enjoyed the scenery on a leisurely drive down to Old Faithful, then back through the geyser basins, past Madison and north past Norris. Beautiful scenery as we passed Gibbon Falls and Gibbon Meadow. 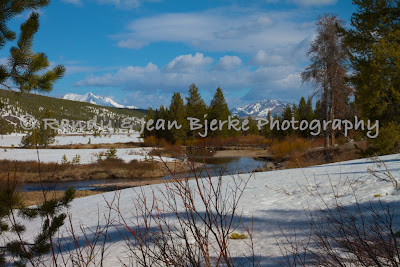 Our next destination was north of Mammoth where a wolf pack had been seen recently along the Gardiner River. We sighted more bison at tiny Joffee Lake along the way.

Beyond Mammoth, in the canyon of the Gardiner River, excitement built when we saw an elk carcass just across the river, not far from the road, a good distance for photos. Wolves are attracted to any animal carcass, or may even have killed the animal, and it was promising that a small group of photographers with big lenses had already gathered.

One of the photographers told us wolves had been on the carcass that morning, harassed by a couple of coyotes, and had stayed there till 10:30 AM. Wolves often return to the carcass in such a situation, and we decided to stay to see if they would return. We waited four and a half hours until after the sun went down, with no sign of wolves, enjoying the conversation among photographers, as some brought out and shared parts of their portfolios in 8x10 prints in binders, or on an iPad, and we talked about various animal sightings.

Having seen only ravens and Canada Geese hanging out by the river, when a pronghorn strolled nonchalantly across the opposite hillside we figured if he had sensed wolves he certainly would not have been there.

The thrill of this first day was a sighting of a grizzly bear on the way back to town. The grizzly was digging for grubs in a meadow near Obsidian Creek, with a few wispy plumes from thermal activity nearby. Numerous cars pulled over, and a few people got out of their cars, as the bear was at a safe distance. Then he decided he wanted to walk up the hill towards the road! Bear watchers scattered back into their vehicles as the animal crossed the road and started up the hill on the other side. What a thrill to be so close to him, but photography was disappointing in the dim light after sundown.
The next morning, this was the first place we went, and the bear treated us to a very nice view, as he crossed the road again, from the hillside where he was first spotted, down into the meadow. 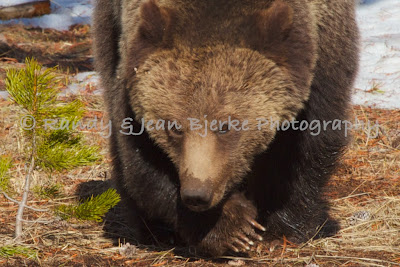 The grizzly is a large predator that usually weighs 400-600 pounds, and can run 35 miles per hour. Once found throughout the plains and western mountains of North America, this species has been reduced to about 2% of its former habitat, and Yellowstone, where it is officially considered a “threatened” species, is important to its survival. Its coloration is usually dark brown, but can vary from a light cream color to black. In contrast to the black bear, it has a more concave face and a distinctive hump on its shoulders. The grizzly is omnivorous and will eat anything from grasses, berries, insects, or fish, to mammals including elk, moose and bison.

After watching the bear, we decided to drive back to Mammoth, east to the Lamar Valley, and then back to Canyon if we had time, which would complete our drive on all the roads open so far in the park. We proceeded across the beautiful Swan Lake Flats where there was still ice on the lake and ponds.

Climbing to the Blacktail Plateau we saw more bison than we had seen so far in the park, mostly grazing on distant hills. A massive animal, bison stand up to 6’6” at the shoulder and the male can weigh up to a ton. They can run at a speed of 30 miles per hour or more. They live up to 22 years in the wild and longer in captivity. Bison are now found mostly in a few national parks and private herds. They are a common sight in Yellowstone, where more than 3,000 live,  and they are one of the special memories of most visitors.


A group of bighorn sheep grazed hear the road. The Rocky Mountain bighorn sheep is extraordinarily sure-footed in navigating high cliffs and rocky mountain terrain, and able to survive the harshest Rocky Mountain winters. A striking animal with its huge curved horns, bighorns eat grasses in summer and more woody plants in winter.
Buttercups were beginning to bloom, and attracting butterflies. 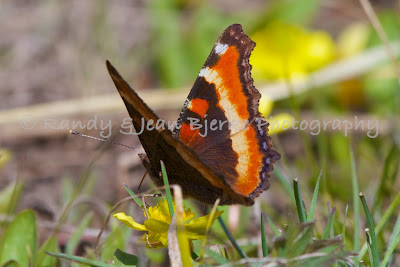 There was no snow on the ground in beautiful Lamar Valley.
Just as Randy remarked we had seen fewer birds than he expected, we came upon this sandhill crane standing in the road! The sandhill cranes of Yellowstone migrate here for summer from wintering grounds in the Rio Grande Valley

Pulling over, we watched the bird join two other cranes, below us down an embankment, then strike off from the other two, foraging among the sage and brush. 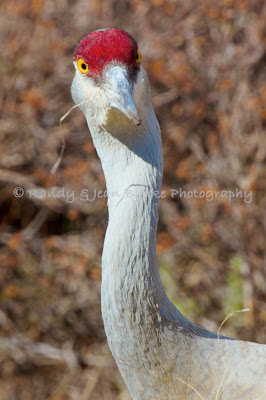 Driving back to Canyon, our second day in the park concluded with a view of Lower Yellowstone Falls, where the snow bank was breaking up and crumbling into the river and the roar of the waterfall filled the canyon.

Our two days in Yellowstone for Opening Day marked the beginning of National Park Week, celebrated nationally in our nation’s 397 parks. What a privilege to spend these two days in magnificent Yellowstone, established as the nation’s first national park in 1872.