Christmas Eve brought a special opportunity to photograph this herd of wintering Bighorn Sheep, on a mountain hillside near Quake Lake, in Montana, not far from Yellowstone National Park. 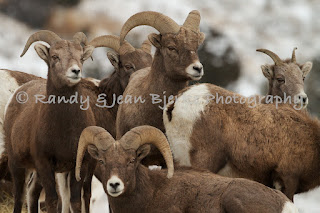 These are amazing and beautiful animals, extraordinarily sure-footed when navigating high cliffs and rocky mountain terrain, and they are able to survive the harshest Rocky Mountain winters. They can be seen on the rocky crags and ledges near the Quake Lake Visitor Center in summer, and come down lower in winter. 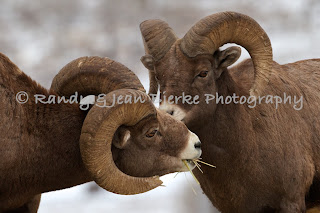 The most distinctive feature of these animals is the males’ massive curved horns that can weigh up to 30 pounds. Their horns are used both as weapons and in defense during fierce battles between males during the mating season in the fall. 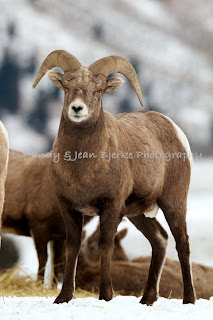 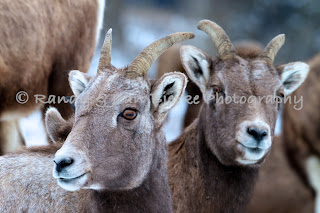 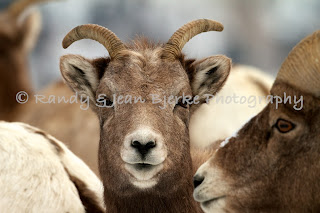 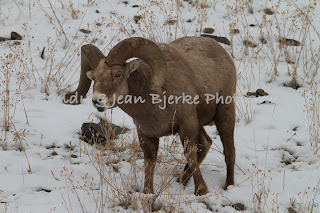 Male Rocky Mountain Bighorn Sheep can weigh over 300 pounds. They stand up to four feet tall. The females also have horns, but much shorter and straighter.


Bighorn sheep eat grasses in summer and more woody plants in winter.
Rams compete for ewes during the mating season, charging at each other with a repeated, violent crashing of their huge horns. People say the sound of the clashing horns can sometimes be heard for up to a mile. These fierce battles can go on for 24 hours between two individuals, until one animal gives up and walks away. Amazingly, the special bone structure of their skulls prevents serious injuries most of the time. 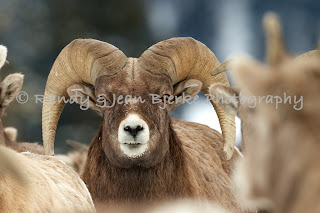 As with elk, only the biggest, strongest, most dominant males will mate. The lambs are born the following spring, and can walk soon after birth and climb as well as their mothers within a day. 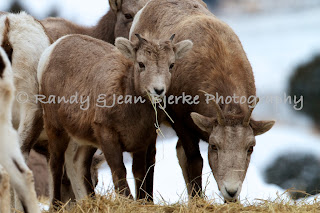 The herd we photographed consisted of about 30 animals. There were several mature rams, and there appeared to be numerous ewes, yearlings, and two-year-olds, as well as a few lambs who looked like they had been born last spring. Bighorn sheep, which may be gray, light brown, or dark brown, have a white rump and white on the backs of all four legs. Maybe to help camouflage them if they are fleeing a predator? 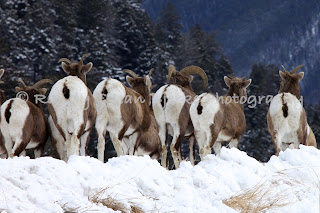 The Rocky Mountain Bighorn Sheep is one of three subspecies of bighorn sheep found in North America, and its range extends throughout the Rocky Mountains from Canada to the southern U.S. Two other groups of bighorns are listed as endangered: the Sierra Nevada Bighorn of California and the Peninsular Bighorn population of the southwestern desert.
It is thought that at one time, bighorn sheep probably numbered up to 2 million animals in western North America. Due to habitat loss, hunting, competition for food from domestic livestock, and disease from livestock the bighorn sheep population plummeted to unsustainable levels by the middle of the 20th century. Significant efforts at re-introduction have brought them back to a total population estimated at about 70,000 animals. 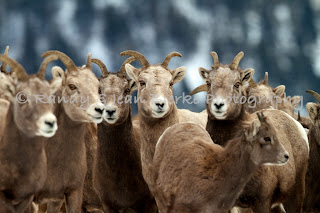