One Winter Day in Yellowstone

Long ago, my hero John Muir, was asked by a prominent individual visiting Yosemite, for suggestions about how to spend a single day in that park.  I suspect it was with scorn, when Muir later shared in writing his advice to someone so “time-poor” as to only have one day to see Yosemite.
It is the same with Yellowstone. We were excited to have arranged for a snow coach tour on one winter day in our nation’s first national park. But we knew that one day was completely inadequate to experience Yellowstone in winter - we were keenly aware of being what Muir would have called “time-poor.”
Yellowstone is a vast and magnificent area, a true wonderland in winter, and it would take at least a few days to reach all of the areas accessible via snow coach, even just to glimpse them briefly. To experience the back country would require significant time and travel on skis or snowshoes. Yellowstone encompasses mountains, canyons, valleys, rivers, waterfalls, geysers, and unique thermal features. It offers awe-inspiring scenery and some of the most fascinating wildlife viewing opportunities anywhere.
Weather conditions vary greatly, can be unpredictable, and can determine and shape a winter experience in Yellowstone. Winter temperatures can be 30 below zero or 30 above. Conditions can range from blizzard, with a couple of feet of snowfall in a matter of hours, to fog and mist, to a crisp and sparkly white landscape with steam from geysers and thermal features rising against a brilliant blue sky.
A visitor might see a lovely sunrise or sunset, a crystal clear winter vista, or be enveloped in a white-out under gloomy grey skies. Accumulated snowfall might be a few inches or a few feet. All these conditions affect views of the landscape and of the wildlife. Each day in Yellowstone is unique, and a visitor can be surprised by unexpected sights and experiences. 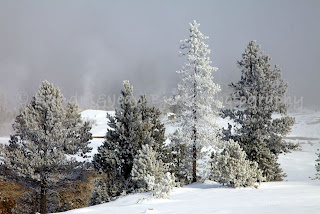 In winter, only the north entrance to Yellowstone is open to regular vehicles. Most of the park can be reached only by snow coach or snowmobile, and then only with a guide. This year, snowfall had been low so far, and the park had only opened to snow coaches and snowmobiles a week prior to our scheduled trip out of the west entrance at West Yellowstone.
The temperature read zero degrees when the six of us in our group met our snow coach at 7:00 AM. on January 4th in West Yellowstone, Montana. Winter days are short this far north, with the official time of sunrise about 8:00 am and sunset about 4:45 pm. We had been warned to be prepared for the possibility of temperatures of 20 below zero, so we were glad it was not colder.
In the foggy, misty, morning cold, the vegetation and the woods along the road near the warmer river, as well as the animals we saw, were all covered in frost. A herd of more than a hundred bison, together with a handful of elk, grazed along the Madison River as we drove into the park, but it was so dark and foggy that photos weren’t possible.
We turned south on the route that would take us through geyser basins and towards Old Faithful, and the light of dawn could be seen in the sky, as we crossed the Gibbon River.
Then the fog and mist returned for at least another hour. The most interesting sighting of the morning was a group of female elk, with one calf, huddled together in the middle of the Firehole River. Immediately our guide said “there must be wolves around.” While another possibility is that they were seeking to feed on aquatic vegetation, we sensed that their behavior more likely reflected the presence of a predator.
Apparently wolves generally don’t go in the water, so the elk retreat to mid-river as a defensive move when they sense the presence of their primary predator. These elk were tightly huddled together when we first saw them, and they were exceedingly alert, carefully peering in every direction as if to identify danger.
One of the elk, who appeared to be the mother of the one calf in the group, was noticeably gaunt, with her ribs showing, and did not look strong. Her calf wanted to nurse but she kept turning away. We wondered if she would last through the long and harsh winter.
Near the group of elk was a group of five trumpeter swans. About 500 of this majestic and elegant bird live in the Greater Yellowstone Ecosystem, and they are joined by about 4,000 additional trumpeter swans from Canada over winter. However, less than ten swans actually live year-round in Yellowstone Park, and the National Park Service considers this bird the most imperiled in Yellowstone.
Coyotes are much more commonly seen than wolves, and we spotted our first coyote soon after leaving the elk and the swans.
When we reached the Old Faithful geyser basin, the frost on the trees around the thermal features, still present in the crisp cold of late morning, was spectacular. Before long, the weather gave way to a sparkling afternoon during which the temperature climbed to the 30s, an especially moderate temperature for Yellowstone in winter.
On our return drive to West Yellowstone, we saw a couple of bald eagles and two coyotes along the way, as well as the same herd of bison along the Madison River between Madison Junction and the Seven-Mile Bridge.

The sun went down over the ridge as we watched the bison. 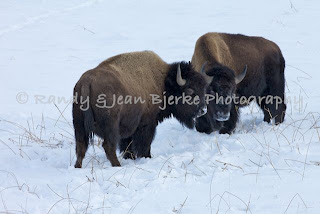 We did not see the bobcat that had been sighted a few times recently near Seven Mile Bridge, nor the wolf that was reported a couple of weeks earlier in Biscuit Basin. We were not even near the magical Lamar Valley in the northeast corner of the park, which is the best place to observe packs of wolves. The animals we saw were the more commonly seen species. But it had been a wonderful day for Randy’s and my 15th anniversary. Along with our friends sharing the snow coach, we all wished for more time in Yellowstone and resolved to come back again in winter.
Posted by Jean at 9:48 PM

The majestic, elegant, pure white Trumpeter Swan (Cygnus buccinator) can be seen year-round in Yellowstone Park, often swimming in the Madison River. It is also a “species of concern” here, and the National Park Service considers it the most imperiled bird in Yellowstone. It is thought that last season, Yellowstone’s year-round population had declined to less than ten birds, though a few thousand additional swans winter in the general area.

Many more swans winter in the Greater Yellowstone Ecosystem, than spend the summer here, and except for the first image above, the remainder of the images in this blog post were made in winter.


The trumpeter swan is known to be sensitive to human activity, and to abandon nesting and wintering areas if there is nearby human development. Nevertheless, this year, a sizable number of swans have been wintering at Last Chance, in our adopted home town of Island Park, Idaho. To our great joy, a small number of swans are also attracted to a small spring-fed pond near our cabin, just below Raynolds Pass and the Montana border. This is where we photographed these birds.
Apparently the group of swans on the nearby pond is able to tolerate a few snowmobiles, and a few people on foot or skis, going by each day. There is no other motorized traffic in winter. The pond is half a mile from the highway and a mile and a half from the nearest year-round residence. These birds allowed us to stand at the edge of the pond to photograph them, and seemed to pay no attention to our telephoto lenses.


The trumpeter swan is a very large pure white bird, with a long graceful neck, and black bill and face. It weighs 20-30 pounds and measures up to four feet in length. It is the largest North American waterfowl, and in flight, its impressive wingspan extends eight feet. Immature birds, called cygnets, are a sooty grey color until their first spring.


Because their diet is primarily aquatic vegetation - a mature adult can eat 20 pounds in a day (U.S. Fish & Wildlife Service) - trumpeter swans need access year-round to open water where that vegetation grows. In shallow water they tip up to reach submerged vegetation, shaking water droplets off their face and neck as they raise their head.

Dabbling ducks such as mallards and ducks that dive, such as the common goldeneye, which have similar feeding habits to the trumpeter swans, may be found along with the swans where feeding conditions encourage it.
In addition to development and habitat destruction over the years, the Trumpeter Swan was hunted to the brink of extinction by the early 1900s, favored for its gorgeous white plumes. The species has recovered to about 20,000 in North America (NPS), of which about 500 live in the Greater Yellowstone Ecosystem, but less then ten individuals live permanently in the park itself (NPS) - down from 27 reported for the year 2000. Another 4,000 Trumpeter Swans from Canada also winter in the same area. (USFWS) Red Rock Lakes National Wildlife Refuge in the nearby Centennial Mountains, provided key breeding habitat for the recovery of the swans. 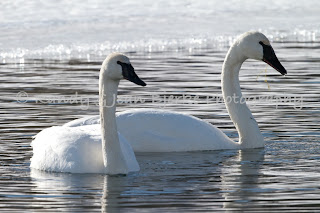 A few days after photographing the birds pictured above, on an early January winter snow coach trip into Yellowstone Park, we observed group of five swans on the Firehole River in Yellowstone, enveloped in the fog and mist of early morning.