"We say that the hour of death cannot be forecast, but when we say this we imagine that hour as placed in an obscure and distant future.  It never occurs to us that it has any connection with the day already begun or that death could arrive this same afternoon, this afternoon which is so certain and which has every hour filled in advance."              ~Marcel Proust

Yesterday, the Greater Yellowstone and Henry’s Fork country lost one of its greatest leaders and advocates. It is with a heavy heart and a deep sense of loss that I write this tribute to our friend Elizabeth Laden, editor of the Island Park News.

My husband Randy and I contributed many photos to the IPNews, which she edited and published with her husband John Losch, and we had much interaction about our submissions. She was always enthusiastic and appreciative, even when she did not publish them.

She called herself CalderaGal. She had a deep appreciation for nature, wildlife, and the environment as well as a profound commitment to bettering the community. She was a free spirit, "into a lot of things," and had more interesting experiences than most, as recalled by her brother in his blog post "My Sister Died Yesterday." She was patriotic in the best way, expressed strong spiritual values, and had such a positive spirit. She cared deeply about helping people, and about issues large and small. As editor of the newspaper and a mainstay of the community, people in Island Park called her about all sorts of things. Recently in response to one of these calls, she spent a day reuniting a family with a lost dog that had ended up with a different family when someone else who found it  “gave it away.”


When she reported in a moving article, on attending a special ceremony in memory of bison killed in 2007-2008, when they strayed outside of Yellowstone, she quoted Arvol Looking Horse, Lakota chief and spiritual leader, as saying,


"Yellowstone . . . is sacred ground. It has been a sacred site for the First Nation's people, and for all humanity who hold deep respect for all Creation. . . . This understanding is how we maintain the balance upon Grandmother Earth, to protect these places, especially for the survival of our future generations to come . . . We must pray for the healing of the human Spirit, to understand the connection to all living beings on Grandmother Earth."

I sensed she felt a deep kinship to this spirituality.

Frequently I learned from her at unexpected times. When I sent her an image of a rare flower hoping she might want to publish it, she replied in an email with the subject line “beware of rare,” explaining how fragile this plant is, how too much attention will lead to its destruction, how even walking near the plant, can upset the soil and root system such that the plant would not survive. Therefore she would never publish a picture of it to confirm it even lived in Island Park. I promised never to tell where I photographed the flower. The people on whose property the flower bloomed, and still grows, have seen and admired the image. They asked where the picture was taken and I told them I promised Elizabeth I wouldn’t say. They have no idea it was actually on their property.

When I sent her an image of a pronghorn in Yellowstone this summer, she said it was a great photo of the animal but it broke her heart to see him standing in noxious weeds. That led to an exchange about the extent of noxious weeds in the national park and throughout Island Park, a situation that very much distressed her. Now when I look at the photo I see the noxious weeds instead of the pronghorn, and I really don’t like that photo any more. We sell other photos but I don’t expect to print that one for sale.

When I recently sent her an image of a magnificent perfect 7 point bull elk, photographed in Yellowstone, with a tag in his ear, she said it was a great photo of a majestic animal, but she didn’t like the tag. However, for the newspaper, the tag would have to be in the picture if she used it. Ever the inquisitive reporter, she inquired with the Yellowstone National Park PR office about the tag and shared with me that she learned this particular animal had once gotten a badminton net and poles wrapped around his antlers, had to be darted and sedated to remove them, and the FDA was concerned about the possible risk if he were “harvested” and humans ingested the meat within a certain period of time, so the tag was a warning to hunters to check his history. Fascinating.

Through the newspaper, her many professional contacts, the boards and organizations she was involved in, and her wide network of interests and personal contacts, her influence built community, and she was always at the heart of it. Her brother put it this way:

“Wherever Elizabeth lived . . . a commune named Joy Tribe, a farm in the foothills, West Yellowstone, a small town in the Idaho mountains, she became a core member of a community, a community that probably would not have even existed had she not been there . . .”             - Greg Laden


I always enjoyed the Caldera Cat Tales column in the newspaper, written by Smokey the Wild Cat (with help from a great ghost writer!), and I was a Facebook “fan” of Smokey’s write-in campaign for Fremont County Prosecuting Attorney. Elizabeth’s lighthearted, humorous approach to commenting on daily life (including her own), or local happenings, or the political scene, through Smokey’s observations was so refreshing.

Randy's and my hearts go out to her family, her husband, her children and grandchildren. Her passing is an unfathomable loss to hundreds of people and to the entire community of Island Park. She lived a rich, full, and productive life, was loved and appreciated by many, and gave much to contribute to others’ quality of life, including hundreds of people she didn’t even know. She leaves an amazing legacy, which will improve life in Island Park for many years to come. But she should have lived another 25-30 years. She gave so much, but had so much more to give. She will be deeply missed by more people than she probably ever would have imagined.

May her spirit soar forever with the eagles in beautiful clear blue skies above the Island Park Caldera, and run with the bison through mountain meadows full of wildflowers, and lush forests, along beautiful rivers like the Henry’s Fork that she so loved.

On Labor Day weekend, we paddled a canoe about five miles down the Henry’s Fork below Big Springs - designated the Big Springs National Water Trail. 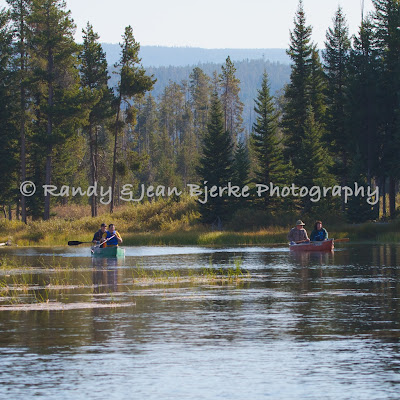 This is a favorite, easy, family friendly float. It is also well known as offering great opportunities for wildlife watching, especially on early morning floats. Canoes, rafts, and flat-bottomed boats are available for rent at moderate prices at Mack’s Inn, which will also shuttle a person one-way for $7 from the put-in to the take-out at the resort, if you need the ride. 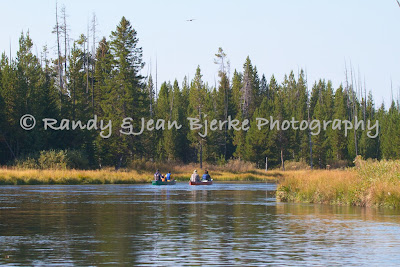 Big Springs produces 120 million gallons of water a day and forms the headwaters of the Henry’s Fork. The water from Big Springs is sparkling clear. The stream bottom is mostly small stones and gravel, with lush underwater vegetation in places.

There were places we had to get out and pull the canoe through shallow water only a couple of inches deep, and other places where the stream narrowed and there were pools eight feet deep. The stream flows through beautiful forest and is lined much of the way with willows that look like great moose habitat.

Moose are frequently seen on this float in late August and September, and we especially wanted to see a moose. Towards the end of the float, just as the houses at Mack’s Inn came into view in the distance, we saw movement in the grass along the river that turned out to be the antlers of two moose. These huge animals spend hours lying down in tall grass which camouflages them well.

As we floated by in the canoe, one of the two big bulls stood up, looked at us, walked over to much on the nearby willows, and then disappeared into the willow thicket.


Minutes later, we spotted this osprey perched high in a dead tree-top. 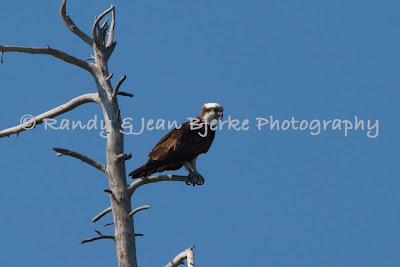 What a thrill to watch it dive to catch a fish, then fly away with its meal.

This magnificent bull was resting not far from the road, in the late afternoon. We spotted him on September 2, 2012 near the road between Sheepeater Cliff and Mammoth in Yellowstone, and of course immediately noticed the yellow tag in his ear. He turned out to be the "famous" bull elk #10 that others have photographed and written about.

As typically happens in Yellowstone, he had attracted an admiring small crowd, who wisely kept their distance. Park rules require humans to stay at least 25 yards from this massive animal.

Curious whether we could find records of bull elk #10, we found mention of him in Beth Pratt's blog from September 2008, when her pictures showed him to be a beautiful 6x6-point bull. In February 2009 Kurt Repanshek wrote in his National Parks Traveler about the death of another well-known elk, bull elk #6, characterizing these two bulls as having been arch-rivals. In January 2011, artist and sculptor George Bumann photographed bull elk #10 near Blacktail Ponds, and by this time the bull had a beautiful, even seven-point rack of antlers. Bumann wrote "I sure hope that we will get to see him next autumn!"  In June 2012, the Guidebook of Yellowstone Wildlife reported that bull elk #10, "one of the most popular bulls in the park," was spotted near Blacktail Ponds. A google search turned up some beautiful images and several videos of this bull. What a privilege to see him ourselves!

Well, he is back! He looks good, well-fed, with his coat in good shape. A beautiful animal, he will no doubt again be one of the dominant males during the elk rut in Yellowstone.

Wondering how he came to be tagged? Al Nash, Public Affairs Officer in Yellowstone National Park, provided this explanation to Elizabeth Laden, editor of the Island Park News: "Several years ago, this particular elk managed to get a badminton net and poles wrapped around his antlers. He had to be darted and immobolized to remove the items. The FDA has concerns over potential impacts the chemical residue may have if humans consume the meat within a certain period of time. Tagging the animal serves as a flag to hunters to check on the history of the animal if harvested."