This year was the first time we observed the elk rut in Yellowstone - an amazing wildlife phenomenon. During the mating season, which begins in September and lasts into October, males bugle their superiority over a herd of females, and bulls can clash fiercely as they vie for the dominant position in a herd.
For years we had looked forward to hearing the sounds of the bugling elk and observing the animals during the rut. By Labor Day, people had begun to hear bugling elk at a distance in the fir forest on the ridge of the continental divide behind our cabin near Yellowstone. But no one had yet seen a mature bull. The males retreat to higher elevations and the cover of forest during the summer and are seldom seen until they come to lower elevations, seeking the females, or cows, during the rut, or mating season.
On Labor Day weekend, we spotted this “spike elk” (no branching of the antlers) near Mammoth in Yellowstone National Park. He appeared a beautiful, healthy, strong, proud animal. But likely he would not mate this year, as he would probably not win out in a fight with a mature bull. The rangers at Mammoth told us they had heard bugling in the distance but had not yet seen “the big guys.”


The bugling of the males is a unique and unforgettable sound. Randy first heard this call aweek later in the Madison River valley east of West Yellowstone in the national park. Bulls normally bugle from a standing position, but this one was bugling while lying in the grass.

Several females, or cows, were lying in the grass or standing on the bank, on the opposite side of the river. They were calling to him and he seemed to be bugling in reply.

In mid September, we spotted this magnificent 6x7 bull lying in the tall golden grass of autumn, again along the Madison west of Madison Junction, with four females nearby. Such a beauty.

As no other bulls seemed to be in the general vicinity, this small group of animals appeared pretty relaxed. The bull eventually got to his feet, leisurely walking over to each of the females in turn. 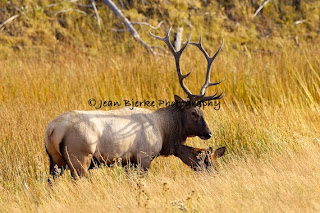 With one of them, he smelled her private parts, then let out a plaintive bugle. We don’t know what he was saying but it surely seemed like a sexual plea. The male is ready to mate, but the female is only ready one day out of twenty, based on her estrus cycle. 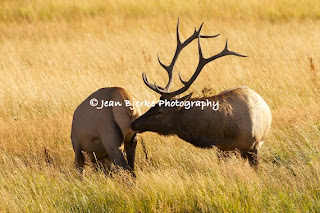 Elk, also called by the Native American name “wapiti,” are a large and impressive animal and a common sight in Yellowstone National Park, although females are seen much more frequently than males, and the bulls are not commonly seen in summer. These animals, especially the males during the rut, can be very dangerous. They have been known to charge people and even vehicles, and they can cause a lot of damage to a car! Rangers recommend staying at least 75 yards from an elk. 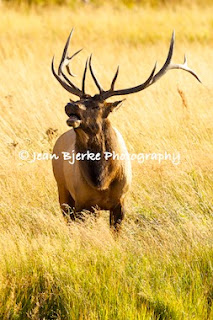 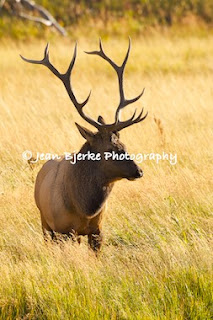 Once found across North America, elk are now found mostly in places like Yellowstone or the National Elk Refuge in Wyoming. A large bull elk may weigh between 700 and 1,100 pounds and stand up to 5 feet at the shoulder with antlers that can reach as much as four feet above above his head. 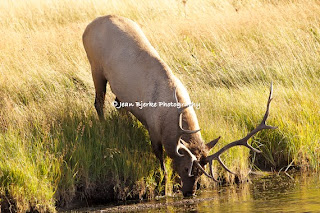 Calves are born in early summer. The bull loses his antlers in March, and grows new ones annually by the time of the breeding season in September and October.  In winter, herds of elk migrate to lower elevations where feeding is easier. In the Greater Yellowstone area, many elk migrate out of the park in winter, to these lower elevations. One of their routes goes through the valley overlooked by our cabin and over Raynolds Pass at the Montana border, into the lower Madison Valley around Ennis.